Although Cooper’s lead has slightly declined from a previous ECU Poll taken in May that showed him ahead by fifteen percentage points, the Governor’s approval ratings remain high. Approximately 52% of registered voters in North Carolina approve of Governor Roy Cooper’s overall job performance, with 36% disapproving. Similarly, 53% approve of Cooper’s handling of the coronavirus outbreak in North Carolina, with 34% disapproving. (Cooper’s overall and coronavirus approval ratings, however, have declined since the previous ECU Poll in May.)

When turning to the economic impact of the coronavirus, about one-in-three (32%) say their household economic situation has gotten worse since the outbreak of the pandemic, while 59% say their situation is the same. Voters also have mixed views on the re-opening process. For instance, half (50%) of registered voters think it was the correct decision to re-open dine-in services at restaurants, while 38% think it was the wrong decision. When asked whether bars should be allowed to re-open, a majority (54%) said no, while only one-third (33%) said yes.

Moreover, when it comes to re-opening restaurants and bars, there is a partisan divide in North Carolina. For instance, only 29% of self-identified Democrats think dine-in services should have resumed, compared to 72% of Republicans. Similarly, 53% of Republicans think that bars should be allowed to re-open, compared to 14% of Democrats.[1]

In summarizing the results of the poll, the Director of the ECU Center for Survey Research, Dr. Peter Francia, commented, “If the election was today, North Carolina would be one of the most competitive states in the nation in contests for President and U.S. Senate. In the race for governor, Roy Cooper remains the favorite.” Francia added, “Cooper continues to receive generally high marks from the public for his handling of the state’s response to the coronavirus and for the job that he has done as governor overall. The approval numbers for President Trump, by comparison, are not as strong. This likely explains, at least to some degree, why Cooper currently holds a double-digit lead in the polls, whereas President Trump is locked in a virtual tie with Joe Biden in North Carolina.”

This poll was conducted June 22-25, 2020. The sample consisted of 1,149 registered voters in North Carolina, with a Credibility Interval (CI) similar to a poll’s margin of error (MOE) of +/- 3.4 percentage points. The data were weighted by age, education, race, gender, mode, and 2016 election modeling. Data were collected using both an Interactive Voice Response (IVR) system of landlines only (n=770) and an online panel provided by Lucid (n=379). 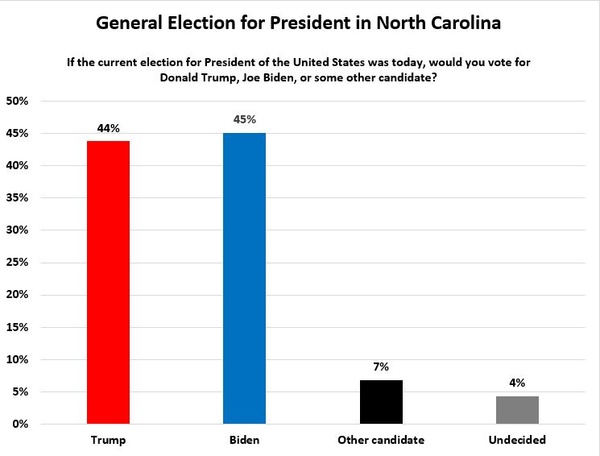 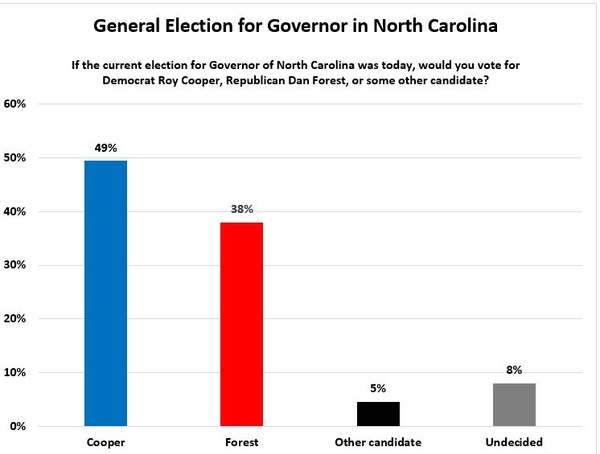 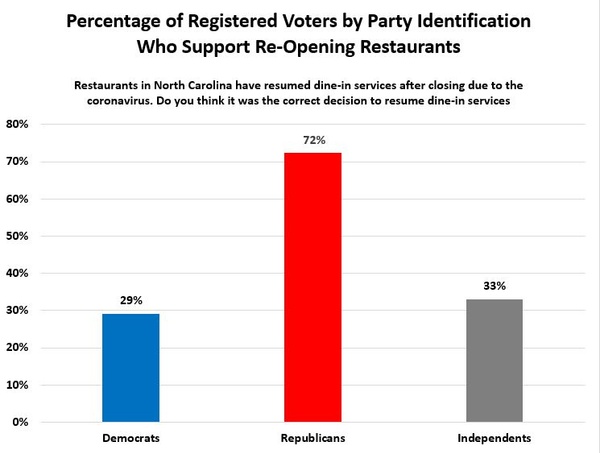 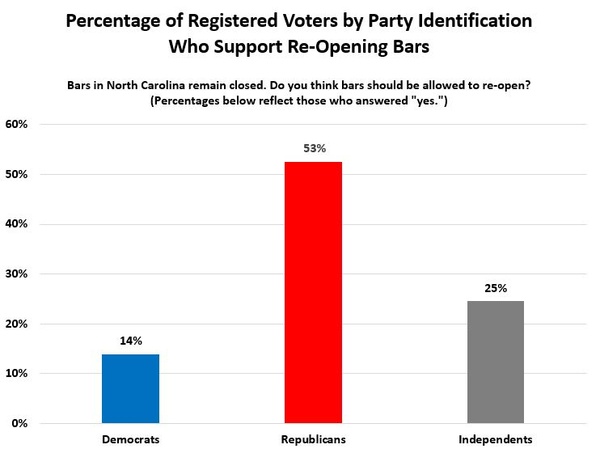