The Center for Survey Research (CSR) at East Carolina University (ECU) conducted a statewide survey of North Carolinians about the Russian invasion of Ukraine and the subsequent U.S. responses. The survey of 850 adults (with a credibility interval, similar to a margin of error of ± 3.9 percentage points) was conducted from March 11-13, 2022.

Events involving foreign affairs, especially those that do not involve American soldiers or civilians, often fail to attract attention or generate concern among the general public. This is not the case when it comes to North Carolinians’ opinions regarding the Russian invasion of Ukraine. According to the results of the ECU Poll, 88% of North Carolina adults report being aware of the invasion, and of those people who are aware of the invasion, almost seven out of ten (69%) consider Russia a “serious risk” to the national security of the United States. Also, four-in-ten North Carolinians (39%) are “very worried” that Russia will use nuclear weapons against Ukraine and another 43% are “somewhat worried.” Only 19% are not worried.

But how do North Carolinians feel about the U.S. response to the Russian invasion of Ukraine? Overall, there is mostly bipartisan support for the steps that the U.S. government has taken against Russia. Specifically, about three out of four (76%) said they favor U.S. economic sanctions against Russia, while a similarly high percentage (79%) agrees with the U.S. ban on oil imported from Russia. On the question of whether these sanctions will improve the chances of ending the Russian attacks against Ukraine, there is less optimism and less bipartisanship. A little more than half (51%) of Democrats believe the sanctions will improve the chances of ending Russian attacks against Ukraine, but only 29% of Republicans share that opinion. (Independents stood out as the group most likely to be “unsure,” at 37% compared to 15% for both Republicans and Democrats.)

In addition, two-thirds (66%) of North Carolinians think the U.S. should assist Ukraine by providing them with military weapons and ammunition. There is less support for direct involvement on the part of the United States, with some partisan difference of opinion. For example, although a slim majority (54%) believes the U.S. should enforce a “no-fly zone” over Ukrainian airspace, slightly more Republicans (60%) support it than Democrats (52%). On the other hand, opposition to committing U.S. troops to Ukraine is quite strong and bipartisan. A minority of Republicans (31%), Democrats (35%), and independents (28%) believe the U.S. should put military boots on the ground in Ukraine.

This bipartisan support does not carry over to President Biden. Only 35% of North Carolinians approve of the overall job Joe Biden is doing as president, and the approval of his handling of Russia’s invasion of Ukraine is only 37%.

This poll was conducted March 11-13, 2022. The sample consisted of 850 residents of North Carolina, with a Credibility Interval (CI), similar to a poll’s margin of error (MOE) of ± 3.9 percentage points. The data were weighted by age, education, race, gender, voting history, and mode. Data were collected using both an Interactive Voice Response (IVR) system of landlines (n=445) and an online panel provided by Lucid (n=405). 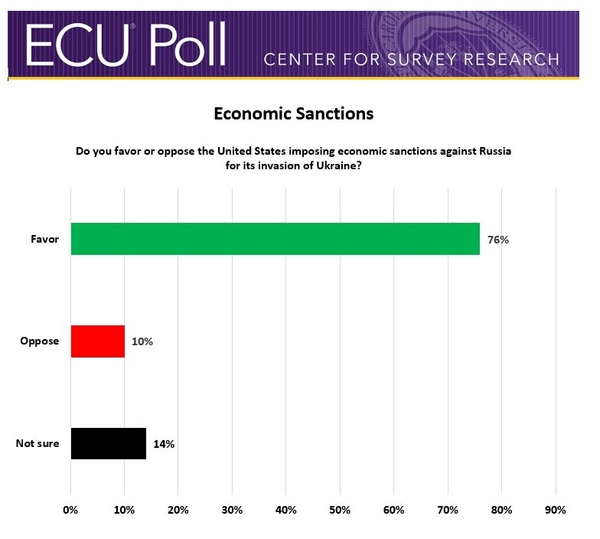 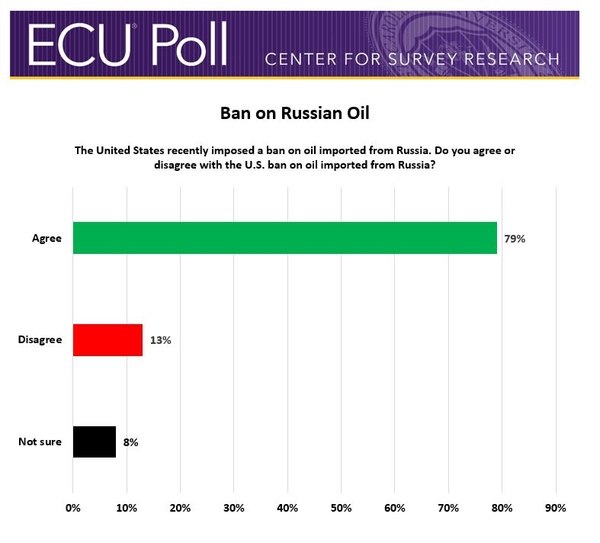 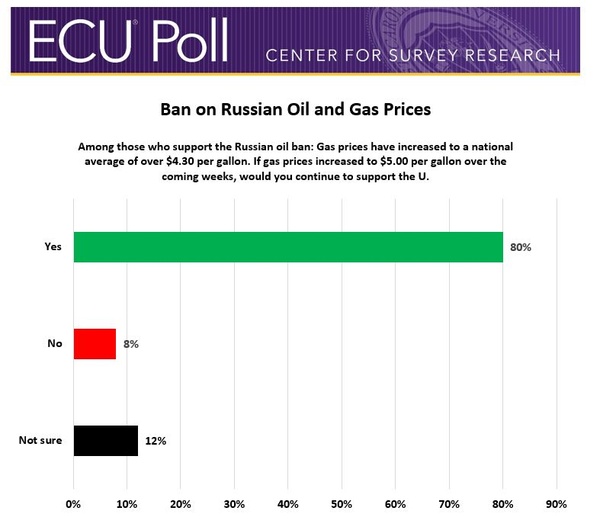 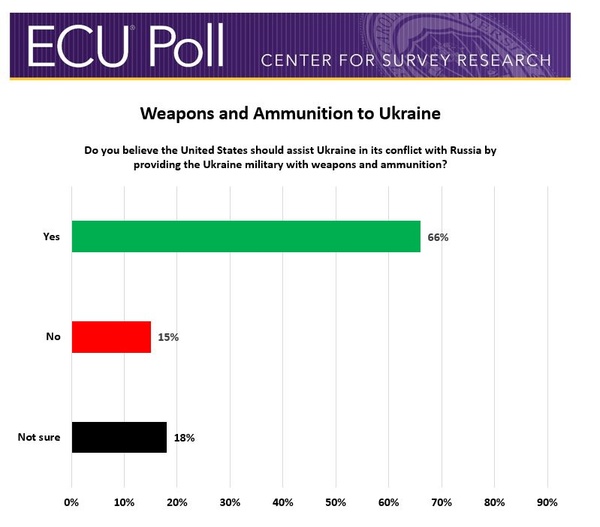 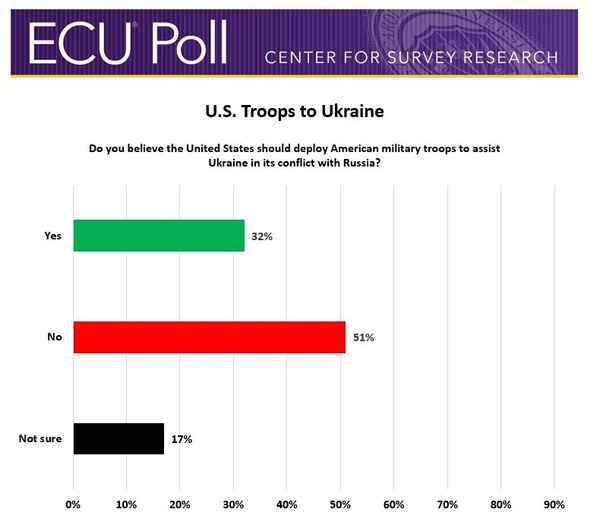 Jonathan Morris, Ph.D.
Senior Polling Scientist
View Full Bio>>
https://cdn.filestackcontent.com/gAn8JZ34TACggmCh9UcY?dl=true
https://cdn.filestackcontent.com/AG3wH2AR3SP2Mo58NZitaz/rotate=exif:true/resize=width:600/gAn8JZ34TACggmCh9UcY
Alethia Cook (Ph.D., Kent State University) is Chair of the ECU Department of Political Science and Director of the Master of Public Administration Program in the Thomas Harriot College of Arts and Sciences and holds the rank of Professor. She is the author of books and articles on topics related to American national security, counterterrorism, civil wars, and pandemic disease. 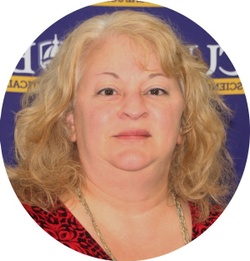 Alethia Cook
Chair, Department of Political Science, ECU
View Full Bio>>
https://cdn.filestackcontent.com/gqzABNiJThShHEFVPYd2?dl=true
https://cdn.filestackcontent.com/AG3wH2AR3SP2Mo58NZitaz/rotate=exif:true/resize=width:600/gqzABNiJThShHEFVPYd2
Brittany aids in the management and analysis of project data in addition to consulting with current and prospective clients. She is pursuing a doctorate in Occupational Health Psychology at East Carolina University (ECU). Brittany received a master’s degree in General Theoretical Psychology with a concentration in Industrial and Organizational Psychology and a certificate in Quantitative Methods for the Social and Behavioral Sciences from ECU. She also has a bachelor’s degree in Psychology, with a minor in Marketing, from Juniata College. Her research interests include employee wellness, workforce reentry, and employee selection. 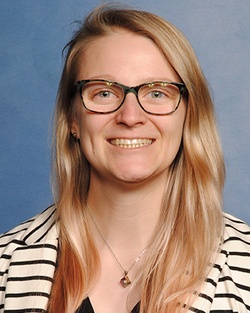