A recent ECU Poll of the U.S. Senate election in Georgia shows Democrat Raphael Warnock ahead of Republican challenger Herschel Walker, 49% to 47%, among likely voters. In the race for Governor of Georgia, Republican Brian Kemp leads Democrat Stacey Abrams, 51% to 44%. (The poll was conducted October 13-18, 2022, among 905 likely voters in Georgia, with a Credibility Interval, similar to a poll’s margin of error of ±3.8 percentage points.) 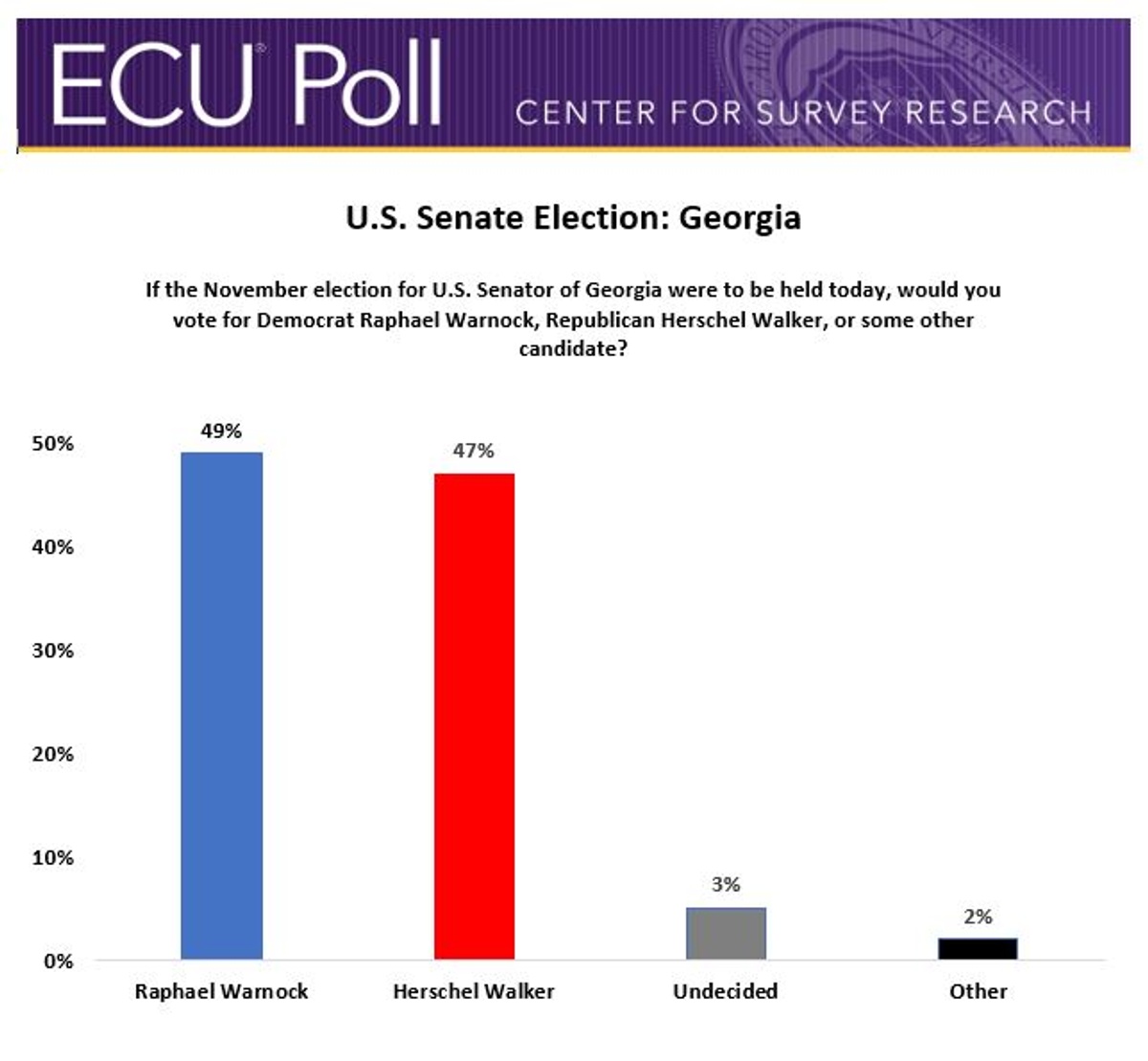 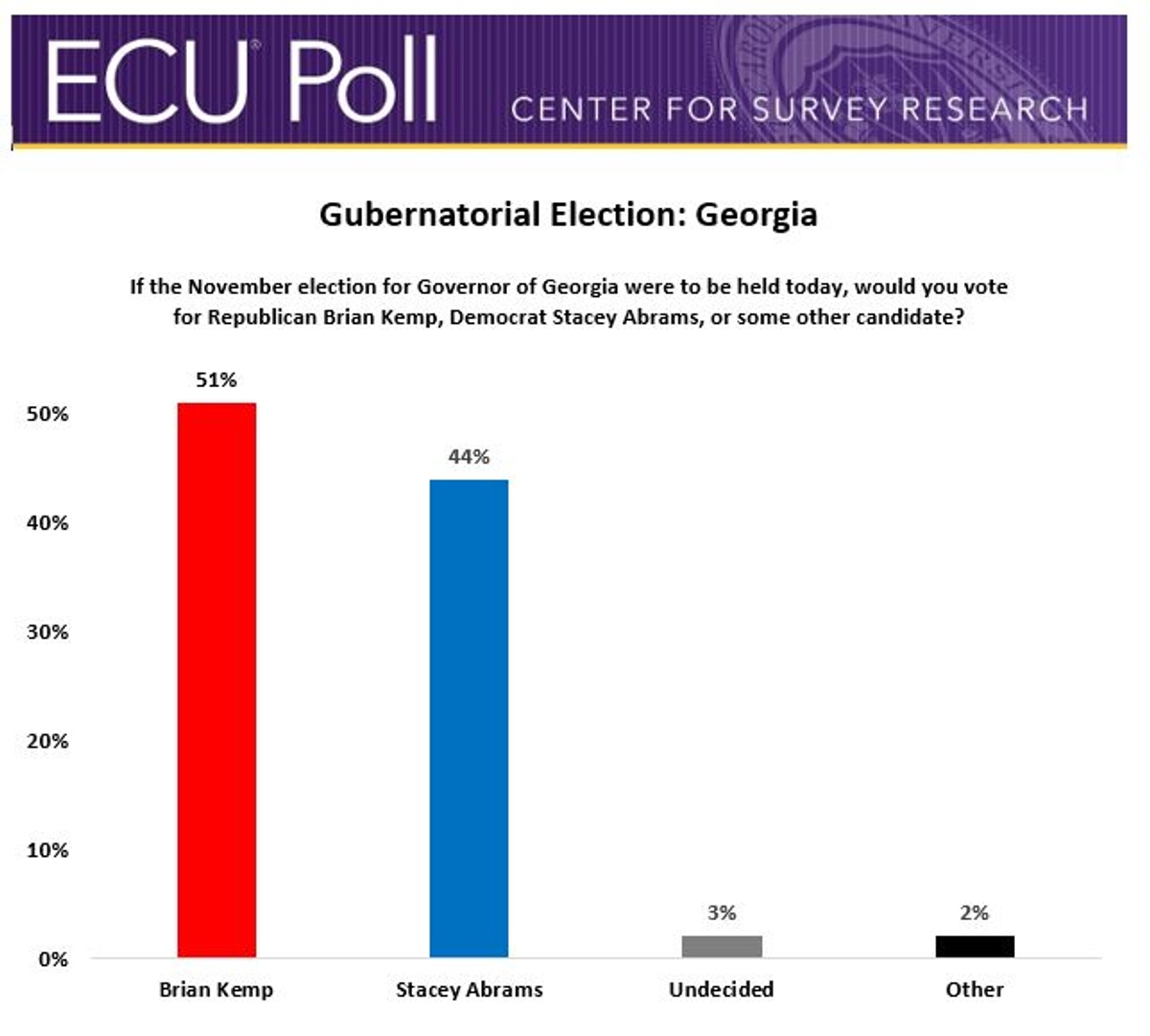 The results of the poll reveal some significant divisions within the electorate. Both Republican candidates draw strong support from working-class white voters (defined as those without a four-year college degree). Among these working-class white voters, Walker is ahead of Warnock by 50 percentage points (72% to 22%), while Kemp holds a significant 77% to 15% lead over Abrams. The Republican advantage narrows among white voters with a four-year college degree. Among this segment, Walker tops Warnock, 51% to 43%, while Kemp leads Abrams, 58% to 40%.

In addition to the Senate and gubernatorial races, respondents were asked how they plan to vote in their U.S. congressional district races. The poll’s results show that 50% of likely voters say they intend to vote for the Republican candidate and 44% say they will vote for the Democratic candidate. The six-point Republican advantage in Georgia is higher than the national average, which currently shows a three-point Republican advantage. 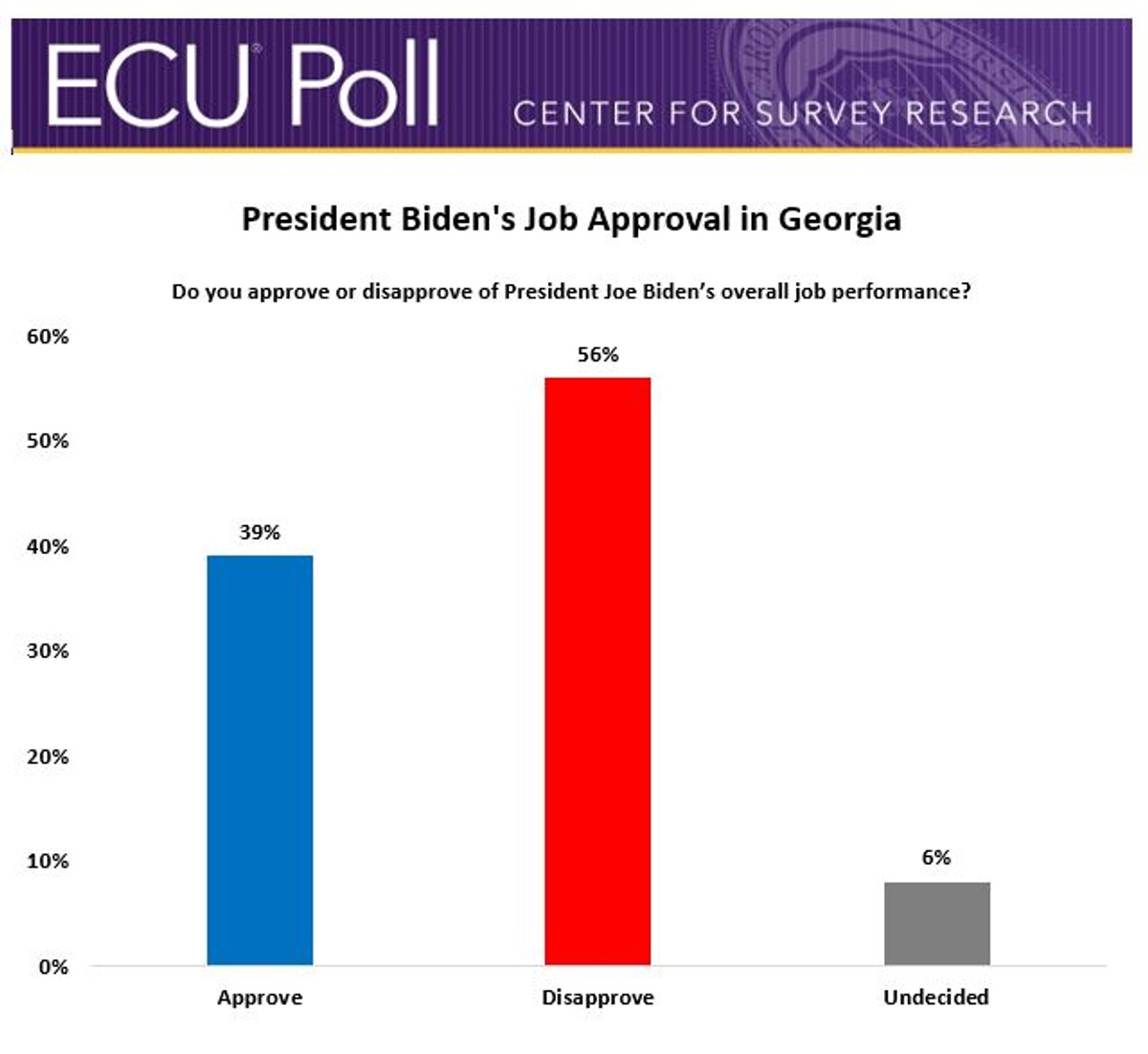 In assessing the results of the poll, Peter Francia, Director of the Center for Survey Research and professor of political science at East Carolina University, commented: “The results in the ECU Poll indicate a challenging electoral environment for Democrats in Georgia based on the low job approval ratings for President Biden. Nonetheless, Georgia’s U.S. Senate election remains extremely competitive. In the contest for governor, Republican Brian Kemp’s seven-point lead makes him the favorite to win re-election.”

This poll was conducted on October 13 through 18, 2022. The sample consisted of 905 likely voters in Georgia, with a Credibility Interval (CI), similar to a poll’s margin of error (MOE) of ±3.8 percentage points. It is important to remember that subsets based on gender, race, education, and age have higher margins of error, as the sample size is reduced. To ensure the sample was representative of the mid-term electorate, the data were weighted by gender, age, education, race, region, and election modeling based on previous statewide elections in Georgia. Data were collected using a cell phone sample of SMS-to-web (n=406), an Interactive Voice Response (IVR) system of landlines only (n=306), and an online panel provided by Bovitz (n=193).

AAPOR Transparency Initiative Report
Download
Related Bios
https://cdn.filestackcontent.com/uEqr9eIoROoMCvohCxzz?dl=true
https://cdn.filestackcontent.com/AG3wH2AR3SP2Mo58NZitaz/rotate=exif:true/resize=width:600/uEqr9eIoROoMCvohCxzz
Peter L. Francia (PhD, University of Maryland) is Director of the Thomas Harriot College of Arts and Sciences Center for Survey Research and is professor of political science at East Carolina University. He is the author of numerous books and articles on various topics related to American elections and public opinion. Dr. Francia’s insights on American politics have been included in the press accounts of national media outlets including CNN, National Public Radio, USA Today, and the Wall Street Journal.