The latest ECU Poll, conducted over the weekend following the Republican Party’s National Convention (August 29-30), finds President Donald Trump with a small lead over former Vice President Joe Biden, 49% to 47%. Only 3% of likely voters remain undecided (with the remaining respondents indicating support for a presidential candidate other than Trump or Biden). Of those who answered that they intend to vote for either Trump or Biden, 96% responded that they have made up their mind already, with just 4% who answered that they are still open to changing their mind.

Results from the poll also showed that the level of excitement about voting in the presidential election does not vary significantly across the candidates’ supporters, with 71% of Trump voters and 70% of Biden voters reporting they are “extremely excited” about voting for president.

Much like the presidential election, North Carolina’s U.S. Senate race remains one of the most competitive contests in the nation. Republican Thom Tillis and Democrat Cal Cunningham are both tied at 44%. The results show another 9% undecided (with the remainder indicating support for a candidate other than Tillis or Cunningham). When the poll asked a follow-up question to these undecided voters about whether they leaned towards Tillis or Cunningham, support was again evenly split.

In the race for governor, Democrat Roy Cooper leads Republican challenger Dan Forest, 50% to 40% (with 8% undecided and 2% indicating support for some other candidate). Governor Cooper continues to benefit from net positive approval numbers as shown in earlier polls. Approximately 52% of likely voters approve of the governor’s overall job performance compared to 35% who disapprove (with the remaining 13% not sure). Governor Cooper also continues to receive high marks for his handling of the state government’s response to the coronavirus (54% approve compared to 35% who disapprove).

Turning to the race for Lieutenant Governor, Republican Mark Robinson holds a narrow lead over Democrat Yvonne Lewis Holley, 43% to 40%. The election for Treasurer is even closer, with Republican Dale Folwell holding a single point lead over Democrat Ronnie Chatterji, 41% to 40%. Roughly 14% of likely voters remain undecided in both contests.

According to Dr. Peter Francia, Director of the Center for Survey Research, voter turnout will be key to determining the outcome in the 2020 presidential election in North Carolina. “Our poll results show that there are few undecided voters and few voters who are willing to change their mind, whether they are currently Biden or Trump supporters. This suggests that campaign efforts to persuade voters are unlikely to make a significant difference. Instead, the outcome of the Trump-Biden contest in North Carolina will hinge on which party – Democrats or Republicans – does a better job of turning out their supporters to vote. By extension, the results in the Trump-Biden election will almost certainly affect several of the highly competitive down-ballot races as well.”

This poll was conducted August 29-30, 2020. The sample consisted of 1,101 likely voters in North Carolina, with a Credibility Interval (CI), similar to a poll’s margin of error (MOE) of +/- 3.4 percentage points. The data were weighted by age, education, race, gender, region, mode, and 2016 election modeling. Data were collected using both an Interactive Voice Response (IVR) system of landlines only (n=757) and an online panel provided by Lucid (n=344). 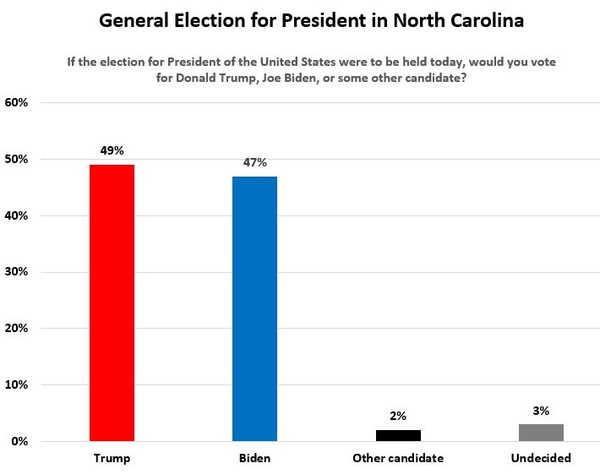 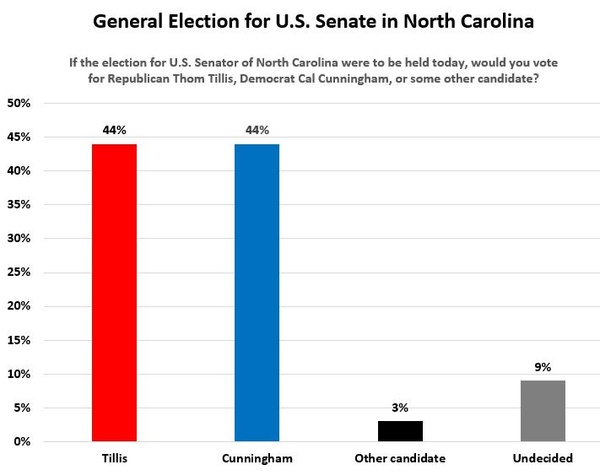 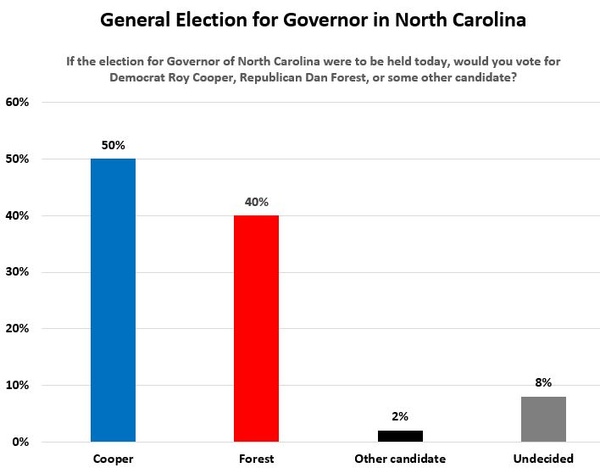 Toplines
Download
Related Bios
https://cdn.filestackcontent.com/uEqr9eIoROoMCvohCxzz?dl=true
https://cdn.filestackcontent.com/AG3wH2AR3SP2Mo58NZitaz/rotate=exif:true/resize=width:600/uEqr9eIoROoMCvohCxzz
Peter L. Francia (PhD, University of Maryland) is Director of the Thomas Harriot College of Arts and Sciences Center for Survey Research and is professor of political science at East Carolina University. He is the author of numerous books and articles on various topics related to American elections and public opinion. Dr. Francia’s insights on American politics have been included in the press accounts of national media outlets including CNN, National Public Radio, USA Today, and the Wall Street Journal.